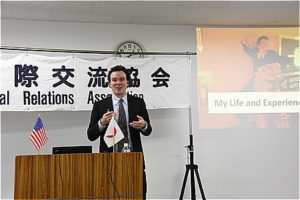 from Oregon State in the USA and now teaching English at Aki-Fuchu senior high school. The title was “My life and experiences that changed me”. He talked about his life so far and incidents and experiences that affected it in detail.
I understood that the basis of his attitude toward a life is to pursue to the end whatever he is interested in.Because of his parent’s divorce, he rather led a complicated life like changing the place to live every week. He was given with a sister after his mother got married. Judging from numerous slides that show the pleasant family life, they seem to be strongly connected each other with family love.He had a keen zest for the drama. His drama performance has been gradually developed from his elementary school age and reached to an almost professional level when he was a university student. He showed three comical skits in which he played as an actor. 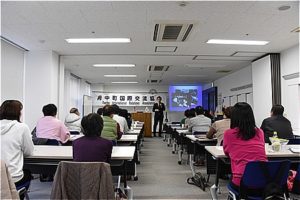 Since his childhood, he has had much concern about Japan. He studied Japanese at his high school and university. But the trigger that made him move to Japan was a serious disease. He suffered from pancreas cancer that is considered most serious and the shortest survival rate among cancers. While he was carrying a struggle against the disease with a ball head due to the side effect of anti-cancer drug, he deliberated what he should do in his coming life, and a conclusion was to move to and live in Japan.
He met a beautiful girl and married her. Together with her, he came to Japan.
He worked ALT at a senior high school in Fukuyama city. He tried to do his best to be adapted to Japan and its people. He talked half in joke that the best way is to visit bars frequently.
He is such a person who loves Japan so much, but he is now in a difficult situation to make him leave Japan considering his wife’s life in future. She has a dream to have a bakery, but it is almost impossible legally for foreigners in Japan to do it.
To make her dream come true, he decided to go back to the USA and help her open a bakery.
He feels very sorry about that, but we, Japanese, also feel sorry and hope stay longer in Japan