The event was held in the large arena of Kusunoki Plaza, the AkiFuchu Lifelong Learning Center, on August 25. The participants were 17 foreigners and 16 Japanese. The former included 15 Vietnamese and 2 Chinese people. The latter included 8 members from the Fuchu-cho Table Tennis Association, 6 table tennis club members from Fuchou Junior High School, and 2 volunteers. Each foreigner paired up with a Japanese to form 16 pairs.
In this competition, the league game was arranged and each pair played 5 matches. 8 judges from the table tennis association, 8 table tennis club members from the junior high school, two interpreters, and our 10 staff members helped the event run the event smoothly as planned.
Most Vietnamese participants had never played table tennis and Japanese pair partners kindly showed them how to swing their rackets and taught them the basic rules. The participants played table tennis in a friendly atmosphere. Because four teams had the same winning points, they advanced to the semifinals. Then the final was held.
The players praised each other’s good fight regardless of whether they won or lost. They had a great time in this international sporting event. 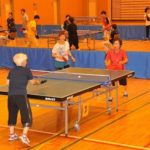