All previous events had been cancelled due to the COVID-19 pandemic. Since infection cases were on the decline, we were able to hold the March 7 event which was the first and last one in the 2020 fiscal year.
We welcomed Mr. Gavin Bingë as a guest speaker. He comes from Johannesburg, South Africa and is teaching English as a lecturer at Akifuchu High School. The title of his presentation was “South Africa and Japan: Similarities and Differences”.
The presenter mentioned seasons, daily life, clothes, sports, animals and languages by comparing South Africa and Japan. He showed us some typical South African animals such as meerkats and springboks and stressed the importance of wildlife protection. He added that visitors can touch lion cubs or dine with giraffe in some locations. As for languages, he said that South Africa is a multiethnic and multilingual country and that there are eleven official languages.Then, he gave us some examples of Afrikaans and other official languages.
According to Mr. Bingë’s explanation, the social problems South Africa faces are poverty and crime. Because most people are poor, they cannot receive adequate medical care. Poverty and crime also leads to short average life expectancy in the country.
The speaker dealt with Mr. Elon Musk, Mr. Nelson Mandela and three Japan national team players for the 2019 Rugby World Cup who were Wimpie van der Walt, Lappies Labuschagné and Matsushima Kotaro. Mr. Mandela’s words, “Education is the most powerful weapon”, which were very impressive.
The audience listened attentively to Mr. Bingë’s interesting presentation and it was a great opportunity to learn about South Africa. 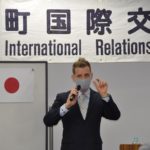 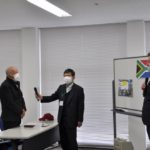 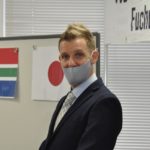 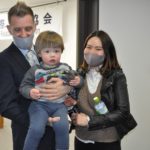