Fuchu International Relations Association (FIRA) hosted ‘Talk by a Foreign Guest’ as its first event of the year on July 18th at Kusunoki Plaza. Due to the situation where more COVID-19 cases have been reported, we took due precautions by limiting the number of participants to 15 and applying sanitization measures accordingly.

The guest speaker was Ms. Mary Popeo from Boston, MA, U.S.A., now residing in Hiroshima. She is a Co-Founder of Peace Culture Village (PCV), a nonprofit dedicated to creating sustainable peace culture and peace education. In her speech entitled “Hiroshima and Me”, she talked about her personal history, how she got involved in peace activities, founding PCV, her current activity base, and its initiatives, etc. for about one and a half hours. Ms. Popeo also asked questions to the participants so that the program would be interactive rather than one-way talk.

Ms. Popeo was raised in a Catholic family and majored in International Relations with a concentration in Asian Studies at Boston College, a Jesuit university. She grew up playing Japanese video games and watching Japanese anime that fascinated her and nurtured her strong interest in Japan in the course of time. This led her to travel to Nagasaki to do a research on the “Kakure Kirisitan” or Hidden Christians as a college sophomore. In Nagasaki, she learned about the atomic bombing of the city at the end of the war, and saw a rosary that had survived the blast, the same kind that she used to pray. This was the turning point that drove her to peace activities.

Ms. Popeo asked the participants such questions as “what is your favorite place in Hiroshima?”, “why did you decide to come to this event?”, “who do you admire and why?” and “how are you feeling after the presentation?” The 15 participants responded actively both in English and Japanese. Ms. Popeo herself named three Hiroshima A-Bomb survivors as people she admired. She said that she was inspired and moved by what one of the survivors told her: “I can’t talk about peace if I continue to hold hatred.”

Ms. Popeo emphasized the importance of peace education and called herself a peace educator, not a peace activist any longer. Now she focuses on developing various peace programs by employing her skills and knowledge on IT technology to educate the youth and to bring up leaders in the next generation. She also pointed out two key concepts – “There are always multiple reasonable perspectives on any given issue” and “There is no single correct answer” – that she wants the youth to learn. As she said this, she herself appeared to be young and energetic leader who hold strong belief. FIRA thanks Ms. Popeo for the wonderful presentation and the participants for engaging themselves in the interaction – it all contributed to make this program a big success. 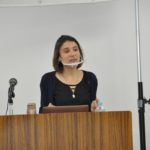 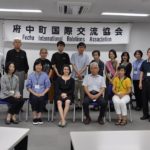 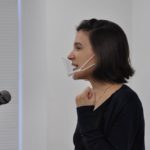 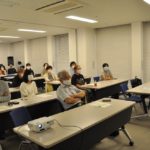