The 11h competition that means 10 years since it started was held at KUSUNOKI-Plaza on August 26, 2018.

We had been worried about the cancellation of the event because the coming typhoon 20 might make KUSUNOKI-Plaza to be used as a shelter. But the worry was completely eradicated, and the event became much more active & pleasant than ever. One of the reasons is participation of junior high school students, three boys and three girls. 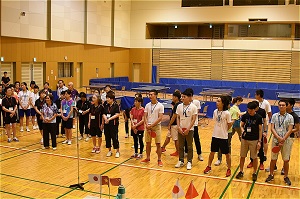 Players are 16 foreigners and 16 Japanese, making 16 pair teams each of whom is paired by a foreigner and a Japanese. Speaking of foreign players,15 are Vietnamese and 1 is Chinese. As for Japanese, 14 members were from Fuchu-Cho Table Tennis Association and 2 were residents of Fuchu Town who

applied for joining this event.  Like the last year, a league game was arranged so that at least 5 matches are performed by a team. As workers behind the scene, 8 judges from Fuchu-Cho Table Tennis Association and our 13 FIRA members supported the event with great effort.

After the end of the competition, as an exhibition game that is a special addition, forming 6 teams by 6 Vietnamese and 6 junior high school students, each team played one game and we watch them. That was an enjoyable experience for players as well as the gallery. 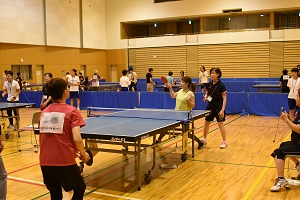 Above all, girl students’ attitude that actively cope with the situation was eye-opening. They spontaneously sat together with Vietnamese people and took lunch together after the closure of the event.  It is impressive that they are actually conducting international exchange by doing so.

We have felt so far the friendly interaction between young Vietnamese players and Japanese players whose ages are almost same as their mothers’ were enjoyable and pleasant to see. This time we also found that participation of young junior high school students, who can talk frankly with and unreserved partner for young foreigners, was very successful for good international relationship.

At the stuff meeting held later it was agreed to increase the number of junior high student to participate up to 14.