“The Speech by a Foreign Guest” for March 3, 2019 was held inviting Barbara Shenk as a speaker. Two years ago, a couple, Dannie Otto and Barbara Shenk in America were assigned as Volunteer Director of WFC (World Friend ship Center). Holding this event was very lucky timing because we just knew that they were leaving in August this year.
The title was “My childhood in Hokkaido”. She was born as a daughter of a missionary in Gettysburg, 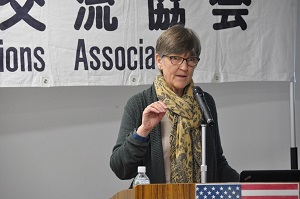 Pennsylvania which was a sever battle field during the Civil War. Later in 1950, the family moved to Sibecha town in Hokkaido and grew up there. She talked mainly about her life in the primary school age, showing interesting pictures. The town locates in the remote country where only one automobile exists, and the weather was severely cold without enough warming goods.
There were some fights with Japanese children before she mastered Japanese language, but soon she melted into the real world and played with them as if she were one of Japanese children. But when there was an event of parent’s association with student’s parents overlooking the class, she realized that she was a foreigner.
Then the family moved to Tokyo and she spent her junior & senior high school at an International School. She graduated the university in the USA. She married with Dannie. She engaged in teacher’s job. When she was in charge of special classes, she taught how important the peace was illustrating the disaster of the atomic bomb. She also has an experience with her husband in farming, producing corn. She liked to operate a combine.
At the end, her husband Dannie explained the activities of WFC, which was founded by Barbara Reynolds and every two years a new director comes and stays. This organization is engaged in a variety of peace movements for the world.