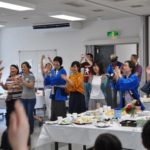 A cultural exchange party hosted by this association was held in the Aki Fuchu Chamber of Commerce on May 26. Luckily, we had wonderful weather. The number of participants was 73 including 31 people from China, Vietnam, Laos, and the United States.

At the beginning of the party, the participants from other countries gave their self-introductions and we played several games to break the ice. Then we made a toast. Many potluck dishes from different countries were set on the tables. While we enjoyed the food, we had many lively conversations.

Several people from China, Vietnam, and Laos wore their traditional clothes and had a lot of fun taking some pictures of each other.

This year’s much-awaited attractions were Vietnamese songs by the Vietnamese participants and Japanese dancing. We had an opportunity to listen to unfamiliar Vietnamese songs about encounters with people and farewell and were fascinated by these people’s beautiful singing voices. Under a dancing master’s instruction all participants danced to Japanese songs: two Japanese popular songs and a Japanese folk song.

We had a lottery session as usual and people who got prizes were extremely happy. We had lively conversations with each other in a friendly atmosphere. The party was a great success.