This year’s excursion was, again, so popular that we had to close application process early. A total of 85 people shared two buses and headed for Miyoshi area.

The first stop was “Hirata Tourist Farm” where apple-picking was planned. Because of the typhoon that hit the area earlier, it was unfortunate that there were not enough apples left on the trees to enjoy picking them. However, the farm instead offered us plenty of apples, expensive Shine Muscat and persimmon at All-you-can-eat deals, and I ate too much Shine Muscat that was so delicious. I even bought lots of fruits at a very good deal to take home. The lunch at Kimita Onsen was also very good and I enjoyed it even though my stomach was full of apples and grapes. There, we all enjoyed going to the hot spring or visiting the nearby art museum.

At “Miyoshi Mononoke Museum”, there was a yokai (imaginary monsters) amusement park created by “Team Lab”, an extremely popular digital art group known for its state-of-art technology. Among others, we enjoyed coloring the yokai images and scanning them. The images appear on the projector on the wall with a three-dimensional movement, which was enjoyable for both children and adults. Speaking of Miyoshi, we cannot forget the wine and we visited the Miyoshi Winery like last time. I enjoyed various wine tastings, ate Muscat-flavored soft cream, and bought a lot of souvenirs here as well.

On the return bus, we played the bingo game getting all excited each time a number was read out. After all, it was a very good excursion blessed with the wonderful weather and no accident. 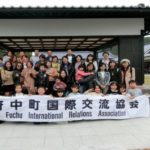